Deep neural networks (DNNs) are prone to “forgetting” past knowledge, which has been coined in the literature as catastrophic forgetting or catastrophic interference [2, 4]. This limits the DNN’s ability to perform continual lifelong learning as they face the “stability-plasticity” dilemma when retaining memories. Stability refers to the preserving of existing knowledge while, plasticity refers to integrating new knowledge.

Synaptic consolidation and Complementary Learning Systems (CLS) are two theories that have been proposed in the neuroscience literature to explain how humans perform continual learning. The first theory proposes that a proportion of synapses in our neocortex becomes less plastic to retain information for a longer timescale. The second theory suggests that two learning systems are present in our brain: 1) the neocortex slowly learns generalizable structured knowledge 2) the hippocampus performs rapid learning of new experiences. The experiences stored in the the hippocampus are consolidated and replayed to the neocortex in the form of episodic memories to reinforce the synaptic connections.

One of the fundamental premises of neuroscience is Hebbian learning [3], which suggests that learning and memory in biological neural networks are attributed to weight plasticity, that is, the modification of the strength of existing synapses according to variants of Hebb’s rule [7, 8].

In our paper, we extend differentiable plasticity [6] to a continual learning setting and develop a model that is able to adapt quickly to changing environments as well as consolidating past knowledge by dynamically adjusting the plasticity of synapses. In the softmax layer, we augment the traditional (slow) weights used to train DNNs with a set of plastic (fast) weights using Differentiable Hebbian Plasticity (DHP). This allows the plastic weights to behave as an auto-associative memory that can rapidly bind deep representations of the data from the penultimate layer to the class labels. We call this new softmax layer as the DHP-Softmax. We also show the flexibility of our model by combining it with popular task-specific synaptic consolidation methods in the literature such as: elastic weight consolidation (EWC) [4, 9], synaptic intelligence (SI) [10] and memory aware synapses (MAS) [1]. Our model is implemented using the PyTorch framework and trained on a single Nvidia Titan V.

Each synaptic connection in our model is composed of two weights:

Then, we apply the softmax function on to obtain the desired logits thus, . The parameters and are optimized by gradient descent as the model is trained sequentially on different tasks , where is the maximum number of tasks in the respective continual learning benchmarks we experimented on.

The Hebbian traces are updated as follows:

where, is the Hebbian learning rate that learns how quickly to acquire new experiences into the plastic component. Here, also behaves as a decay term to prevent a positive feedback loop in the .

At the start of training the first task $T_{1}$, we initialize to zero:

Then we update the Hebbian traces in the forward pass using Algorithm 1 (see below). On line 6, we perform the Hebbian update for the corresponding class, . This hebbian update method forms a compressed episodic memory in the that represents the memory traces for each unique class, , in the mini-batch. Across the model’s lifetime, we only update during training and during test time, we use the most recent Hebbian traces to perform inference. 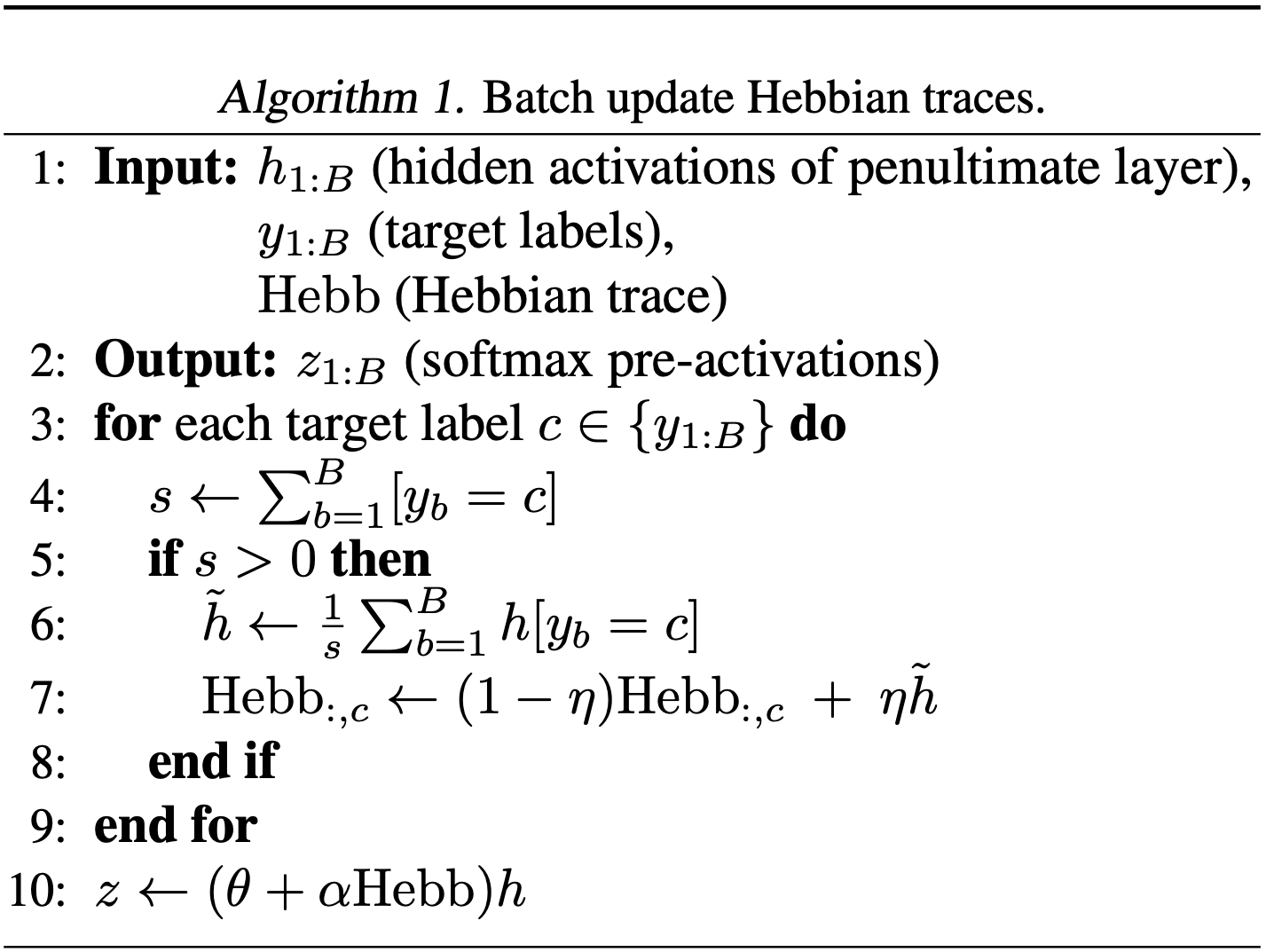 An example of a Hebbian update for the active class c = 1 (see Line 4 in Algorithm 1):

Following the quadratic loss in the existing work for overcoming catastrophic forgetting such as EWC, Online EWC, SI and MAS, we regularize the loss, , where is an importance measure for each slow weight and determines how plastic the connections should be. Here, least plastic weights can retain memories for a longer period of time whereas, more plastic weights are considered less important.

where, are the learned network parameters after training on the previous tasks and is a hyperparameter for the regularizer to control the amount of forgetting.

We adapt these existing synaptic consolidation approaches to DHP-Softmax and only compute the on the slow weights of the network. The plastic part of our model can alleviate catastrophic forgetting of learned classes by optimizing the plasticity of the synaptic connections.

A sequence of tasks are generated by splitting the original MNIST training dataset into a sequence of 5 binary classification tasks: , , , and , making the output spaces disjoint between tasks. We trained a multi-headed MLP network with two hidden layers of 256 ReLU nonlinearities each, and a cross-entropy loss. We compute the cross-entropy loss, , at the softmax output layer for the digits present in the current task, . We train the network sequentially on all 5 tasks with mini-batches of size 64 and optimized using plain SGD with a fixed learning rate of 0.01 for 10 epochs. More details on experimental setup and hyperparameter settings can be found in the Appendix section our paper.

We observe that DHP Softmax provides a 4.7% improvement on test performance compared to a finetuned MLP network (refer to the graph above). Also, combining DHP Softmax with task-specific consolidation consistently improves performance across all tasks .

Conclusion
We show that catastrophic forgetting can be alleiviated by adding our DHP Softmax to a DNN. Also, we demonstrate the flexibility and simplicity of our approach by combining it with Online EWC, SI and MAS to regularize the slow weights of the network. We do not introduce any additional hyperparameters as all of the hyperparameters of the plastic component are learned dynamically by the network during training. Finally, we hope this will foster new progress in continual learning where, methods involving gradient-optimized Hebbian plasticity can be used for learning and memory in DNNs.

Future Work
A natural extension of our work would be to apply DHP throughout all of the layers in a feed forward neural network. Also, the current model relies on labels to “auto-associate” the classes to deep representations. An interesting line of work would be to perform the Hebbian update with a self-supervised representation learning technique. It would also be interesting to see how this approach will perform in the truly online setting where the network is expected to maximize forward transfer from a small number of data points to learn new tasks efficiently in a continual learning environment.